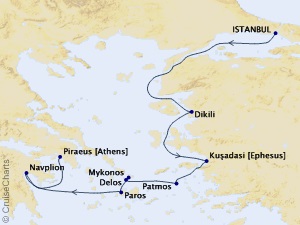 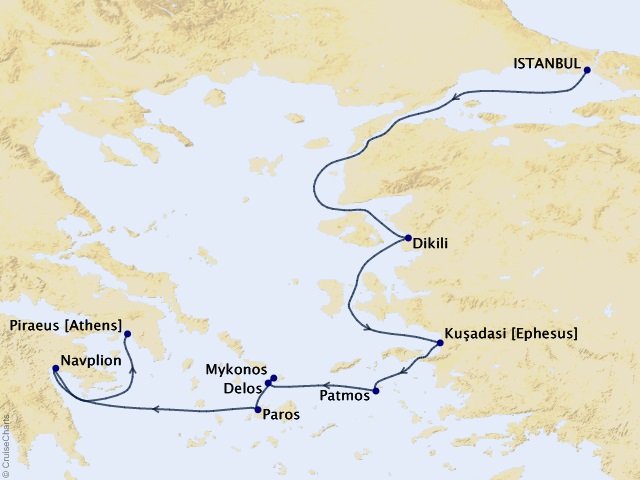 Featuring lectures and discussions with contributing writer to The New Yorker, Robin Wright, and former Deputy Director of the Central Intelligence Agency, John McLaughlin, this voyage on the Aegean Sea offers an extraordinary opportunity to talk with these leading thinkers and actors on the world stage about the current state of U.S. relations with the wider world.

This voyage is a journey to the intellectual home of the western world, where each day brings new vistas of royal blue sea, bleached cliffs, whitewashed houses, and the exquisite remains of Classical civilization. You will call first in Turkey: first at Pergamon, once the very heart of scholarship in the Hellenistic world; and then at Ephesus, one of the most awe-inspiring survivals of Roman architecture in the Mediterranean. At Ephesus, you will enjoy an included guided tour of the ruins with an exclusive after-hours cocktail reception and concert by the Aegean Chamber Orchestra at the ruins in front of the Library of Celsus. Your day in Patmos brings us face-to-face with the stunning 11th-century Monastery of St. John, while Delos, Mykonos, and Paros embody the most iconic images of the Greek isles: spectacular Cycladic architecture, breathtaking vistas, and temples and ruins that reveal millennia of history. Your final call is in Nafplion for an excursion to Mycenae, the center of power from which Agamemnon launched his attack on Troy.

Our World Affairs cruises provide expert insight into contemporary issues that affect our lives and the lives of our children and grandchildren. As you travel into the past and engage with its legacy, you will also attend to the present, engaging with your guest experts on the current state of international relations and on the prospects for the future.*

*Cruise line theme is subject to be cancelled or discontinued at any time without notice.

Information and pricing is subject to change without notice. While we do our very best to ensure that information and pricing appearing in this website is complete and accurate, we cannot be responsible for incomplete and inaccurate representations, which may or may not be under our control. In the event of a pricing error, misrepresentation or omission, we reserve the right to adjust the pricing or make any other corrections. Prices shown are in USD unless stated otherwise.