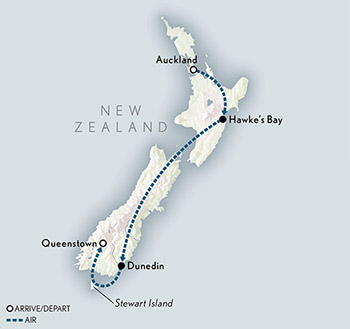 
Discover the epic beauty of New Zealand on a fascinating luxury adventure that reveals cultural and natural splendors on both of its unique islands, enjoying amazing food and wine, encountering majestic wildlife and exploring far-flung locales made easily accessible by private chartered air.

One of New Zealand’s loveliest harbors is gracious, dignified Dunedin. The city boasts fine Victorian and Edwardian buildings complete with spires, gables and gargoyles. Its Scottish heritage is present in street names and the appeal of its handsome stone buildings. One of Dunedin’s most famous visitors, Mark Twain, wrote "The…Scots…stopped here on their way to heaven, thinking they had arrived." Dunedin boasts the country’s only kilt maker and whisky distillery as well as a statue of Scottish poet Robert Burns in the heart of the city. Dunedin’s surroundings are renowned for their magnificent scenery and wildlife. The nearby beautiful Otago Peninsula provides a breeding habitat for such rare birds as the royal albatross and yellow-eyed penguin. The biggest attraction is probably the albatross colony at Taiaroa Head – which can only be visited as part of pre-arranged guided tour. Nowhere else on the globe do these birds breed so close to humans. Other sights to visit include Octagon Park, St. Paul’s Cathedral, Edwardian Railway Station, and Otago Museum.