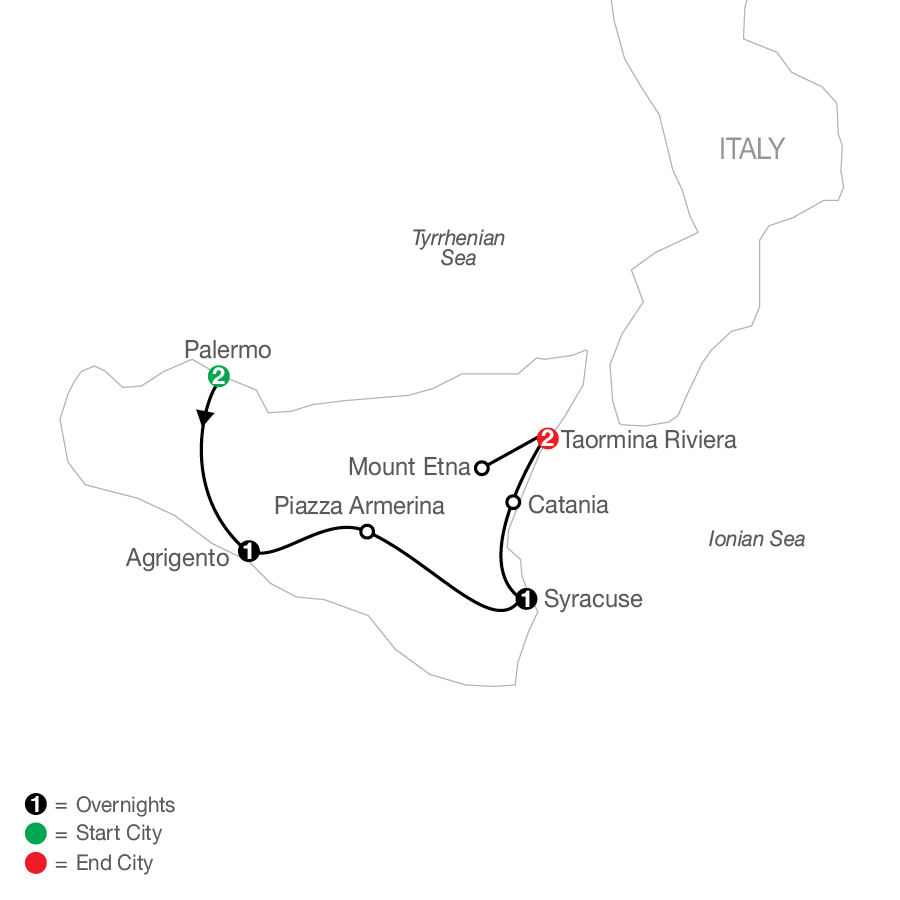 Escape to Sicily for seven days of beauty, cuisine, and history-without the crowds you’d find in the high season. Begin in Palermo and meet your Tour Director and traveling companions for a welcome dinner at your hotel. Spend the following day on a guided sightseeing tour of Palermo’s ornate Piazza Bellini and Capo Market. See the stunning baroque features of the Church of the Immacolata, and visit the historic Palermo Cathedral. Enjoy the panoramic view of the Conca d’Oro in Monreale, and visit the 12th-century Norman Cathedral with its treasured byzantine mosaics.Walk through the 24-centuries-old Valley of the Temples with your Local Guide in Agrigento, visit Piazza Armerina’s Villa Romana del Casale to admire the world’s largest collection of Roman mosaics. In Syracuse, the birthplace of mathematician Archimedes, you’ll take a guided visit to the archaeological site of the 5th-century-BC Greek Theater, Garden of Paradise, Ear of Dionysus, Altar of Hieron II, Roman Amphitheater, and the Cordmaker’s Cave. Travel to Catania, where you’ll sample Sicily’s famous Arancino, and spend two nights on the spectacular Taormina Riviera, your base for a fascinating excursion to Mount Etna-the largest active volcano in Europe. Explore Taormina, and complete your Sicilian Escape with a fabulous farewell dinner at a local restaurant. You’ll treasure the time spent exploring Sicily’s famous sights and stunning scenery-without the crowds of the busy travel season on this spectacular guided tour of Sicily!

Exclusive Amenity Available! Contact your travel advisor to ask about exclusive benefits available for this tour.

Valid for travel in 2022 and 2023. Please contact your travel advisor for more information.*

*Promotion is subject to availability, does not apply to Globus Escapes, may not be combinable with certain fares or other amenity offers, is capacity controlled and may be withdrawn at any time. Other restrictions may apply.

Sicilia is the favorite island of Gods in traditional poetry. The most powerful and biggest ancient city in Sicilia is Siracusa. Its name may come from the native word "Siraco", which means "marsh", due to the bogs which surrounded the city. Or it may derive from a Phenician etymology signifying the presence of seagulls on its rocky shores. Few cities of the ancient world had the importance Syracuse had in Magna Grecia, the ancient Greek settlements in Italy. The most spectacular monuments in the archeological area surrounded by colorful Mediterranean vegetation are the Greek amphitheatre and the Orecchio di Dionisio (Dionysius' Ear). Besides touring the Archeological Museum that contains beautiful objects, Ortigia Island, the heart of the old Greek city, is worth a visit. Outside the city limits is Eurialo Castle, an incredible structure built to protect the city from the Cathaginians, and Pantalica, the great rocky necropolis in Anapo Valley.