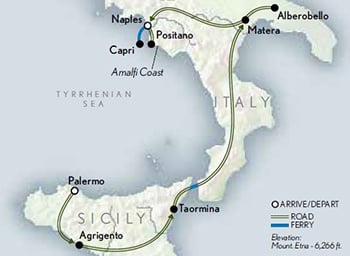 Sicily, Puglia & the Amalfi Coast
Experience the glories of Southern Italy on a panoramic journey revealing authentic cuisine and culture as well as the slow pace of rural life. Discover Sicily's ancient ruins, exotic landscapes and the rocky shores of breathtaking Capri.