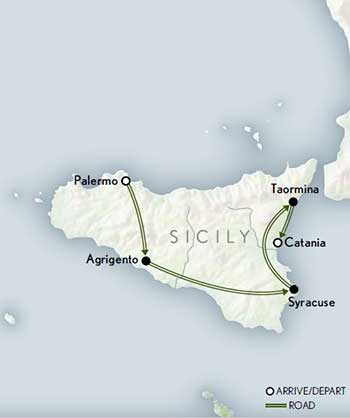 Tailor Made Italy: Sicily West to East
Travel with your private party on this Luxury Tailor Made Journey, departing when you choose and with expert local guides leading the way; you can even customize the itinerary to your interests.

Revel in the unique charms of the largest island in the Mediterranean, from its bustling capital of Palermo to the shadow of smoldering Mount Etna, and experience the enduring influences of the cultures that have ruled this historic crossroads, including the Romans, Spanish, Greeks, French and Moors.

Sicilia is the favorite island of Gods in traditional poetry. The most powerful and biggest ancient city in Sicilia is Siracusa. Its name may come from the native word "Siraco", which means "marsh", due to the bogs which surrounded the city. Or it may derive from a Phenician etymology signifying the presence of seagulls on its rocky shores. Few cities of the ancient world had the importance Syracuse had in Magna Grecia, the ancient Greek settlements in Italy. The most spectacular monuments in the archeological area surrounded by colorful Mediterranean vegetation are the Greek amphitheatre and the Orecchio di Dionisio (Dionysius' Ear). Besides touring the Archeological Museum that contains beautiful objects, Ortigia Island, the heart of the old Greek city, is worth a visit. Outside the city limits is Eurialo Castle, an incredible structure built to protect the city from the Cathaginians, and Pantalica, the great rocky necropolis in Anapo Valley.