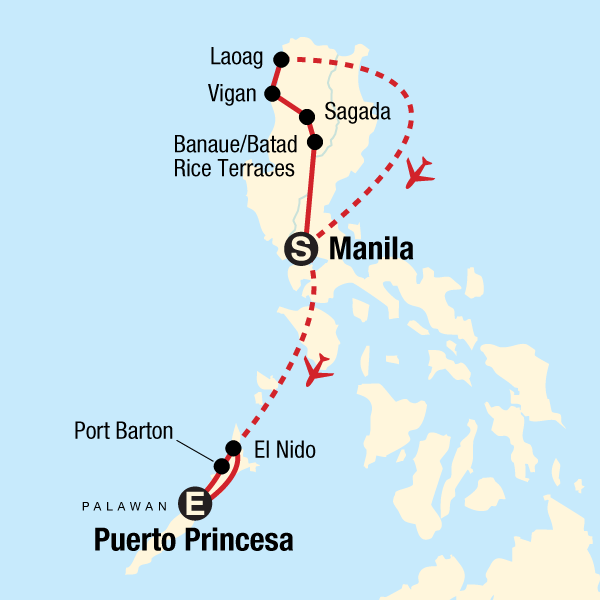 Northern Philippines and Palawan Adventure
The colourful culture, pristine beaches, and colonial history of the Philippines aren't easy to capture in just one trip but this 16-day tour is a pretty decent effort. Envelop yourself in colonial history within Manila's former walled centre and the charming town of Vigan, embark on a subterranean boat ride through an underground cave system, and visit a self-governing penal colony. The Philippines' beaches are some of the world's best, so we've left plenty of time for snorkelling or simply just lounging on the beaches of El Nido. This way, your knowledge of the country will only deepen alongside your tan.

Highlights
See the Spanish colonial town of Vigan, Gaze over rice terraces in Batad, Snorkel above El Nido's coral system, Lounge on a secluded beach in Port Barton, Boat through an underwater cave

Banaue (Banawe) or the Banaue Rice Terraces are 2,000 year old terraces carved into the mountains by the indigenous tribe of the Ifugao people of Northern Luzon, Philippines. A national cultural treasure and a UNESCO World Heritage Site, Banaue was built as a massive engineering project to cover the sides of the valleys. It’s a means of irrigation that delivers water through the mountain streams and springs nourishing the rice fields that grow on the terraces.

Sagada is a small mountain province in Northern Luzon, Philippines. This village is cradled inside the valley of the Central Cordillera Mountains. It’s a refuge village for many travelers looking to get away from the city life. Travelers can trek the mountains that leads to the caves and waterfalls, and participate in the tribal celebrations and thanksgiving. A popular and eerie sight to discover is Sagada’s hanging coffins placed on the face of cliffs. This ancient tradition originates from southern China having believed it will prevent beasts from taking the bodies so the soul may rest eternally in peace.

Vigan is a beautiful Spanish-colonial town with cobblestone streets, remnants of colonial architecture and horse-drawn carriages called kalesas. Vigan is listed a UNESCO World Heritage site for its 16th century Spanish-Colonial preservation in Asia. It’s the capital city of Ilocos Sur and sits on the Luzon Region of The Philippines. Travelers can walk through Crisologo Street, a picturesque Spanish street lively and romantic as the day transitions into night. The aroma of empanadas lingers in the air and antique shops display collective pottery and beach shells.

El Nido is a coastal settlement of Palawan, Philippines that consists of 45 islands and islets also known as the Bacuit Archipelago. The pristine warm beaches and clear waters is a short walk away from the jungle and main town Bacuit Bay. El Nido which also means, “The Nest” has been inhabited by humans as early as 22,000 years revealing fossils and burial sites with imprints from the Late Neolithic Age. Since 1225CE, the Chinese have been trading with the residents of El Nido in search of the edible birds’ nest that engraved the island’s history and name. El Nido is presently a large marine sanctuary protected by the government preserving its flora, fauna, and natural beauty. Travelers can go island hopping in the Bacuit Archipelago, or spot dugongs, turtles, manta rays, coral reefs, and gentle whale sharks. Travelers can also explore the 12,000 year old Ille Cave, dive their way beneath water trenches to reach the “Secret Beach” not frequently visited by outsiders, or kayak through a cathedral-like cavern and bird watch the “nest gatherers.”


A lagoon of emerald and blue framed by dense ancient forests greets you as you approach Puerto Princessa's most renown attraction: the Subterranean River National Park, a designated UNESCO world heritage site. Tour the 8.2 kilometers of underground river by boat through otherworldly, spectacular caves. For mountain hiking and trekking, ascend to the Cleopatra's Needle, where wild rivers, lush forest and vibrant meadows all wait to be explored. Hop on a boat and spend an afternoon on the white beaches of the Honda Islands, with dive sites along Pandan Island and Arreceffi Island, and the Panglima Reef to see large coral masses and reef sharks. Remains left from WWII can also be visited, such as the Plaza Cuartel. Experience local and regional culture at the Vietnamese Village or by visiting the Palawan Museum, where artifacts of from Tabon Cave may be found.