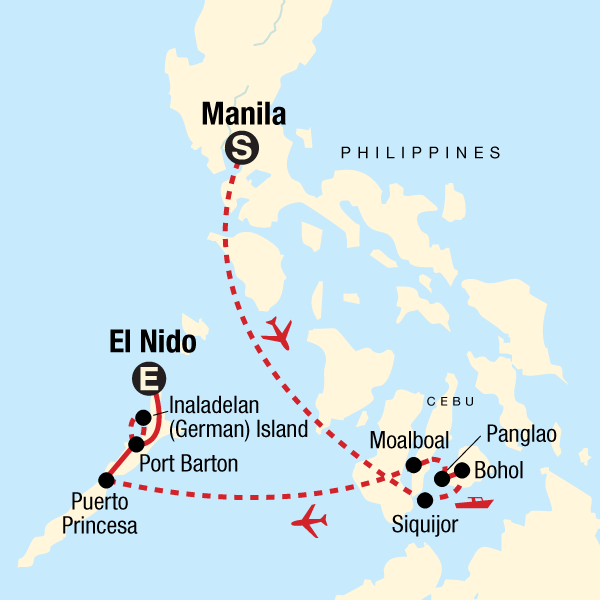 Philippines Island Hopping: Clear Skies & Blue Waters
Now's the time to explore the Philippines on your terms with this tour that's affordable for young travellers. Camping on a beach under a night sky? That's just the tip of the sensory iceberg you'll enjoy on this 13-day island-hopping tour through the best of Philippines’ nature, beaches, and cultural life. Roam Bohol’s famous Chocolate Hills (you can't eat them, sadly), snorkel with massive whale sharks in the clearest of clear blue waters (if the season is right), wander through exotic Manila and historic Cebu, and take a boat ride through Palawan’s mesmerizing subterranean river. And with meeting lots of local people and getting plenty of free time to explore, this trip brings meaning and liberation. Be free.

Highlights
Relax on gorgeous white-sand beaches, Get to know the Bohol community during a homestay, Explore the Chocolate Hills of Bohol, Learn about tiny tarsiers monkeys, Snorkel crystal-clear blue waters and with a giant school of sardines, Camp under the stars on Inoladoan Island, Tour Palawan's famous Puerto Princesa subterranean river by boat

Siquijor is a mysterious island province off the shores of Cebu in Central Visayas, Philippines. The legend behind Siquijor or Isla del Fuego given by the Spaniards deems, that the island rose from the sea during a thunderstorm conserving natural worldly powers. This legend continues that many healers, sorcerers, witches and other dark creatures flocked to this island to retrieve the magic from the mountains. Though the legend may have gone too far, visitors are often welcomed with cocktails and a deck chair to lounge on the beach. The island is filled with molave trees where fireflies swarm giving the island an eerie glow from afar. Visitors can participate in healing festivals, stroll through the Bandilaan Natural Park, make new friends at the butterfly sanctuary, and take a dip in the Cambugahay Falls in Lazi, Siquijor. The coral reefs that surrounds the island often attracts snorkelers and scuba divers to explore the depths of the island.

Bohol is an island in The Philippines, located in the middle of the Visayas. Bohol is the tenth largest island in the Philippines. Tagbilaran City is the capital of Bohol, and the location of a number of landmarks as well as the port and a small airport. Bohol is known for its beaches and resorts, incredible diving, and The Chocolate Hills, beautiful limestone formations that can be explored by land or air.


A lagoon of emerald and blue framed by dense ancient forests greets you as you approach Puerto Princessa's most renown attraction: the Subterranean River National Park, a designated UNESCO world heritage site. Tour the 8.2 kilometers of underground river by boat through otherworldly, spectacular caves. For mountain hiking and trekking, ascend to the Cleopatra's Needle, where wild rivers, lush forest and vibrant meadows all wait to be explored. Hop on a boat and spend an afternoon on the white beaches of the Honda Islands, with dive sites along Pandan Island and Arreceffi Island, and the Panglima Reef to see large coral masses and reef sharks. Remains left from WWII can also be visited, such as the Plaza Cuartel. Experience local and regional culture at the Vietnamese Village or by visiting the Palawan Museum, where artifacts of from Tabon Cave may be found.

El Nido is a coastal settlement of Palawan, Philippines that consists of 45 islands and islets also known as the Bacuit Archipelago. The pristine warm beaches and clear waters is a short walk away from the jungle and main town Bacuit Bay. El Nido which also means, “The Nest” has been inhabited by humans as early as 22,000 years revealing fossils and burial sites with imprints from the Late Neolithic Age. Since 1225CE, the Chinese have been trading with the residents of El Nido in search of the edible birds’ nest that engraved the island’s history and name. El Nido is presently a large marine sanctuary protected by the government preserving its flora, fauna, and natural beauty. Travelers can go island hopping in the Bacuit Archipelago, or spot dugongs, turtles, manta rays, coral reefs, and gentle whale sharks. Travelers can also explore the 12,000 year old Ille Cave, dive their way beneath water trenches to reach the “Secret Beach” not frequently visited by outsiders, or kayak through a cathedral-like cavern and bird watch the “nest gatherers.”