23-Nights Wildlife Safari: Around the World by Private Jet - Private Jet Journeys from $149,500 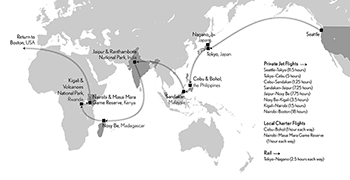 Wildlife Safari: Around the World by Private Jet
Circle the globe by exclusively chartered private jet, and experience the incredible diversity of Earth’s wildlife — arguably the true wonder of the world — from the noble Bengal tiger and placid whale shark to the endangered mountain gorilla and playful lemur. Travel in a small group of 48 guests on a customized jet equipped with fully lie-flat seats, staying in luxurious accommodations along the way and encountering iconic animals with the best experts at your side. Best of all, enjoy the unique insider access and authentic cultural encounters that are a hallmark of A&K’s journeys by private jet.

Sandakan is best known for its natural orangutan sanctuary, the largest of only three orangutan reserves in the world. The orangutan has often been called the "Wildman of Borneo," and at one time was nearly extinct.