From Barges To Luxurious River Boats

In previous posts, we learned how river cruising evolved from an experimental steamboat on the Saône to paddle-wheelers plying rivers in the United States and Europe to something resembling river cruising today: the first hotel barge in France. Since that first barge made its debut in 1966, forward-thinking entrepreneurs continued to develop and build riverboats that were the blueprints for the industry today. Next, we'll head to a city on the Rhine to what may well be considered the birthplace of modern-day river cruising. 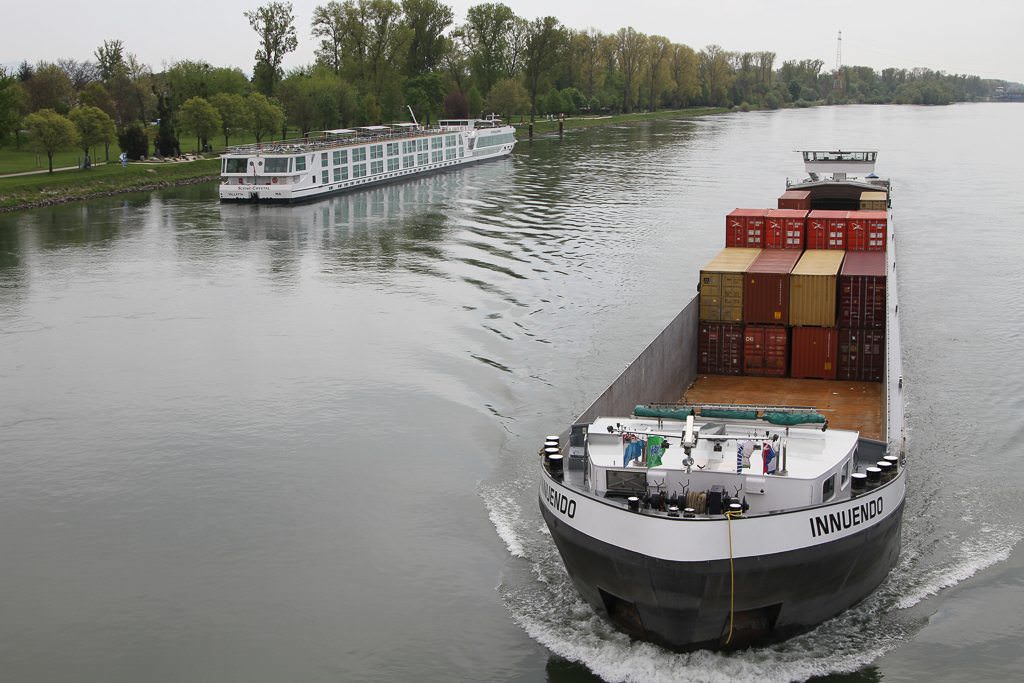 Scenic Crystal docked in Kehl, Germany, on the Rhine. Strasbourg, France, is across the river from Kehl. © 2012 Ralph Grizzle

Today, our adventure takes us to Strasbourg, France. This lovely city on the Rhine is graced with inspired architecture, picturesque parks, charming canals, plentiful bicycle paths and a mix of German/French culture. For livability and for tourists, surely Strasbourg ranks among France’s best cities.

Throngs of river cruise passengers visit Strasbourg annually between the arrival of spring and the close of the new year. They typically set out from the banks of the Rhine to explore the Old Town, where they crane their necks ever upward to gaze upon the impressive Strasbourg Cathedral. It is a sight to behold. The poet Goethe described the cathedral as a “sublimely towering, wide-spreading tree of God.” Indeed, rising 466 feet tall, the cathedral ranked as the world’s tallest building for more than two centuries, from 1647 to 1874. 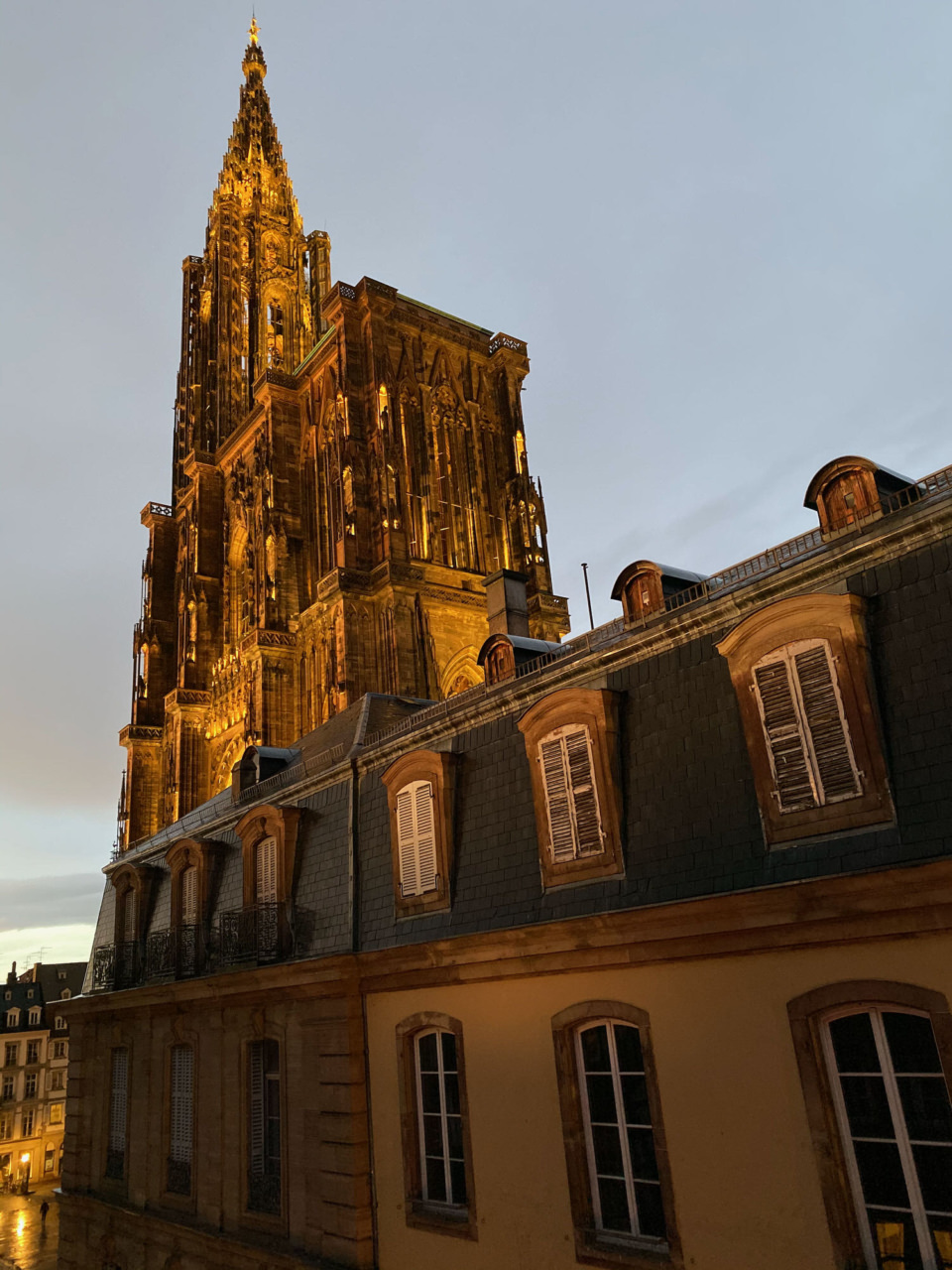 As seen from our hotel room (Hotel Rohan), the Cathedral of Our Lady of Strasbourg. © 2019 Ralph Grizzle

Though the cathedral is a must-see, inside and out, we'll stray from the crowds for a 10-minute stroll to the historic quarter known as Le Petit France. Be sure to mind the trams and bicycles. They’re ubiquitous throughout Strasbourg.

Situated at the Grand Île's western end, Le Petit France features half-timbered buildings and fabulous (and filling) restaurants. This charming quarter was home to the city's tanners, millers and fishermen during the Middle Ages. Today, it’s one of the city’s major tourist attractions. It’s also one of the most beautiful parts of the city. Here, the River Ill splits into cascading channels that are spanned by an old defensive structure. 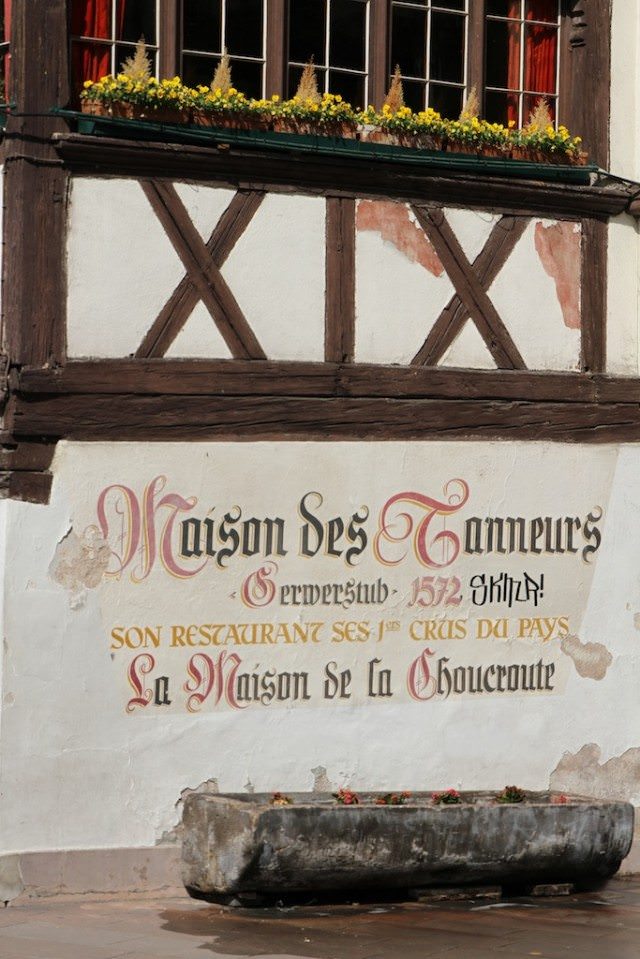 The Tanners House, a restaurant occupying a building from 1592 in Strasbourg’s Le Petit France. © 2012 Ralph Grizzle

We'll pause here for a moment to admire this beautiful feat of engineering. With its three bridges and four towers, the structure is one of Strasbourg's most photographed tourist attractions. Built as a defensive work during the 17th century, the Barrage Vauban (Vauban Dam) was constructed over four years from the pink sandstone found in the nearby Vosges Mountains. 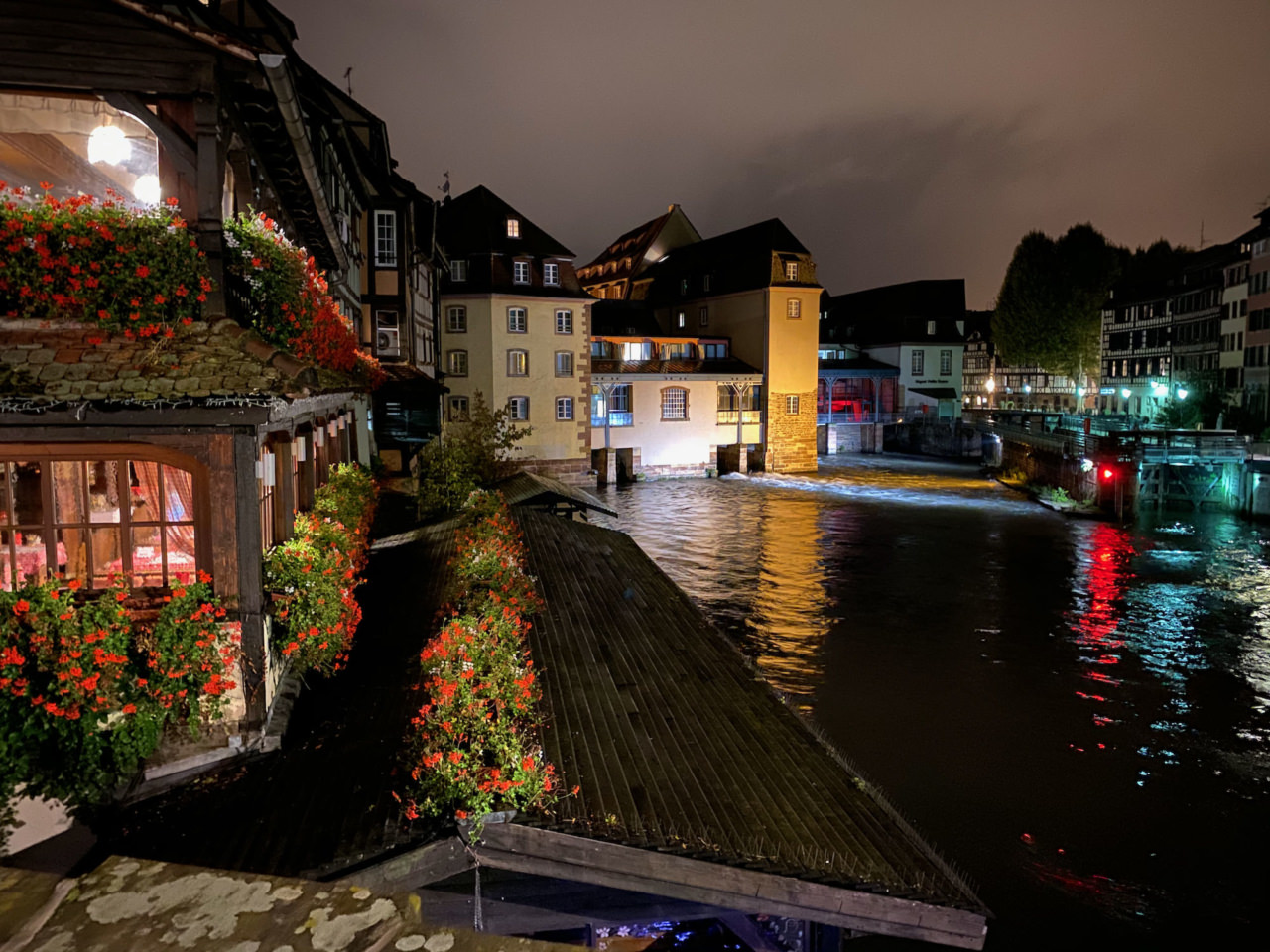 In October of 2019, we strolled Le Petit France after dinner, lovely its canals and lighted buildings. © 2019 Ralph Grizzle

In the event of an attack, the dam could raise the level of the River Ill to flood all the lands south of the city, making those lands impassable by the enemy and thus protecting Strasbourg's historical center. The defensive measure was successful in 1870 when Strasbourg was besieged by Prussian forces during the Franco-Russian War. 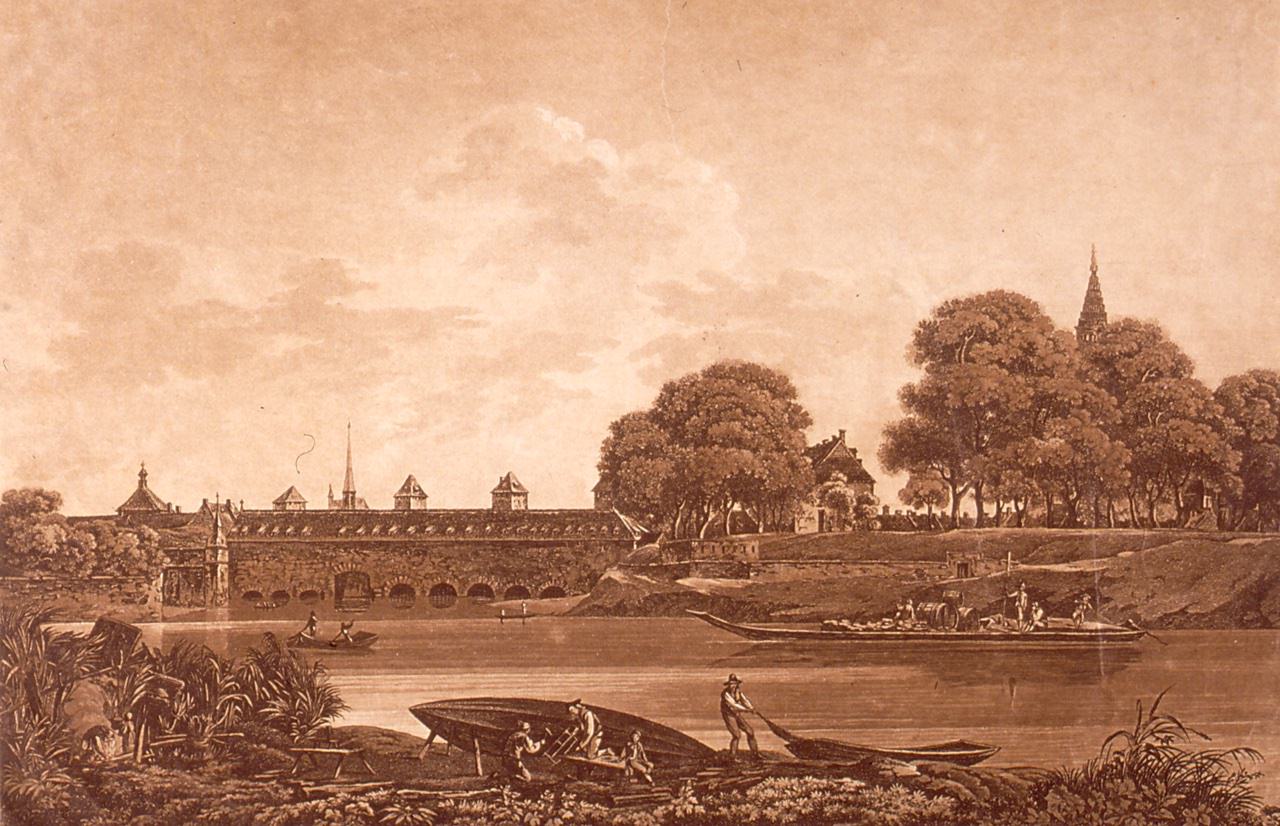 An image of the upstream side of the Barrage Vauban from 1750. Courtesy Bibliothèque nationale et universitaire of Strasbourg.

The Barrage Vauban was constructed from plans by the great military engineer Sébastien Le Prestre de Vauban. His plans called for a substantial number of sandstone slabs from the quarries in the nearby Vosges, a range of low mountains east of Strasbourg. To transport the sandstone, engineers constructed the 12-mile Canal de la Bruche. Starting near Molsheim, the canal descends via 11 locks from the Vosges foothills to the western side of Strasbourg.

As we're paused here admiring the Barrage Vauban and learning its story, we see several glass-enclosed canal boats passing. The boats are carrying tourists seeing Strasbourg via its canals. The importance of canals to Strasbourg cannot be overstated.

After the Canal de la Bruche was built, others followed, the Canal du Rhône at Rhine, connecting, as the name implies the Rhine and the Rhône/Saône rivers; the Canal de la Marne au Rhine, which connects Strasbourg with the Burgundy and Champagne regions; and the Grand Canal d'Alsace, which makes possible navigation between Basel and Strasbourg for tens of thousands of boats annually. 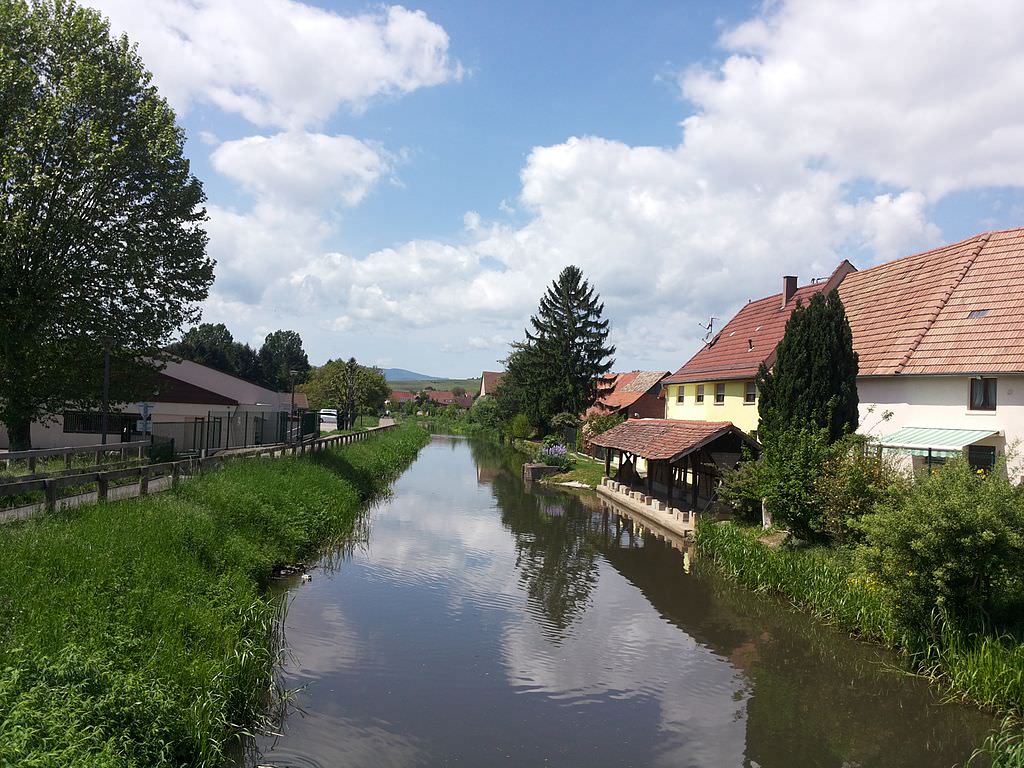 With its many canals and the river Rhine, Strasbourg has been an important center for fluvial navigation for centuries. In fact, we're going to learn why Strasbourg can be considered the birthplace of modern-day river cruising. Our story begins in Betschdorf, a little more than 25 miles northeast of Strasbourg, where a boy would grow up to build the first boats with cabins.

A Potter, An Artist & An Entrepreneur

In the early 1700s, immigrants from the Rhineland began making stoneware in the region that would become known as Betschdorf. The town abuts the northern edge of France's largest undivided Forest, Forêt de Haguenau. A stroll along the streets in Betschdorf reveals many 18th-century half-timbered houses, typical of the villages rural villages in the Alsatian lowlands. The stoneware tradition would continue, and today, Betschdorf ranks as a center for craft pottery, especially salt-glazed stoneware.

The son of a potter, Gérard Schmitter was born in 1936. Following in his father's footsteps, the young Schmitter studied decorative art in Limoges, but he would set his sights on a succession of entrepreneurial endeavors. After receiving his education, he and two colleagues bought a quarry, and in 1970 opened a leisure park in Berg (France) called Paradisland. Following that, the young Schmitter opened a restaurant called Rhinland. It was here that our story begins its diversion to the rivers. 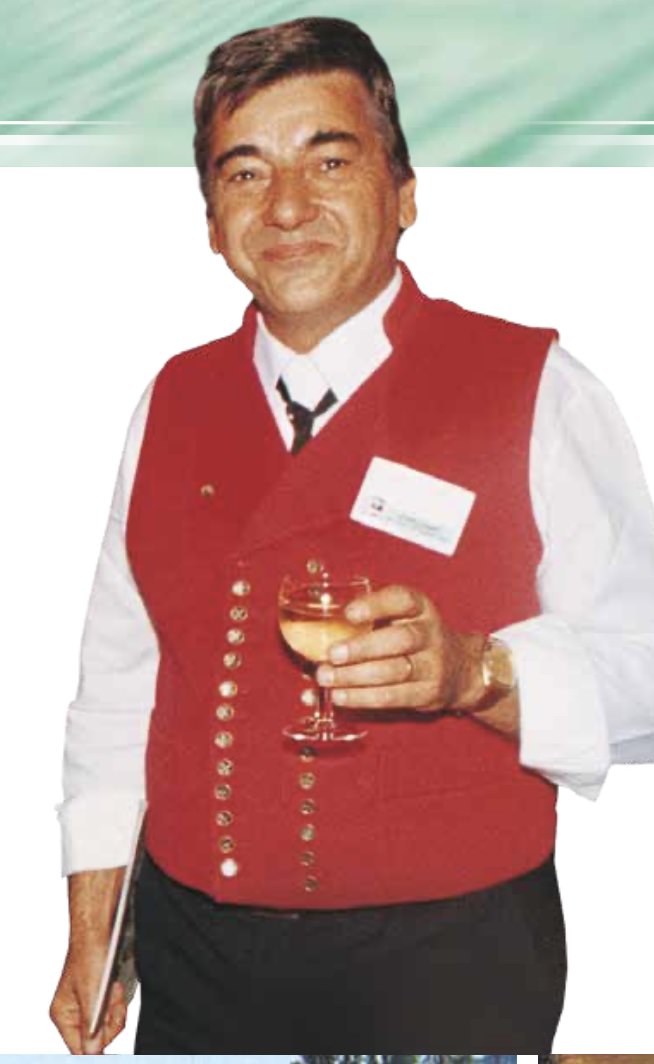 Rhinland was situated upriver on the Rhine from Strasbourg. Noting that his 500-seat restaurant did well on the weekend and less so during the week, in 1976, Schmitter came up with the idea to drum up business. He would charter a boat to cruise between Strasbourg and Plobsheim. The boat he chartered, appropriately named Strasbourg, launched a new company called Alsace Croisières. It was essentially the birth of river cruising in France on boats larger than barges.

In 1976, Schmitter chartered the Strasbourg, pictured above, for day trips on the Rhine. Courtesy of CroisiEurope

Six years later, in 1982, Schmitter bought his first ship, the aptly named "Alsace I." Its itinerary was to sail the Rhine between Lauterbourg and Plobsheim. You could drive between the two, about 50 miles apart, in an hour, but Schmitter's boat allowed for leisurely sailings, where people could dine during the day and dance the evening away upon their return.

Inspired by his success, in 1984 Schmitter began to offer cruises between Strasbourg and the Lorelei, which you'll remember from our post on steamboats on the Rhine. The voyage lasted several days, and as there were no sleeping quarters on Alsace I, guests had to disembark for overnight stays at hotels in towns such as Rudesheim.

Seeking to improve on that and with encouragement from his wife Janine, Schmitter decided to build the first river boats with cabins. In 1984, the company launched its first cabin boats to navigate on the Rhine and its tributaries. Those boats – the Hansi, the Kléber and the Petite France – made it possible for Alsace Croisières to extend its voyages along the Rhine and its tributaries – the Neckar, the Moselle, the Main and the Saar – and to venture to Holland's inland waterways.

Two years later, the company upped the comfort ante by acquiring what it called its first "Prestige" category boat. Originally built as a tugboat, the redone "Kellermann" introduced a totally new design. At 75 meters, it was the longest in Schmitter's five-ship fleet. And with 48 cabins, Kellermann was also the most comfortable. (Until a few years ago, Kellermann operated as MS Andante for Holland's Calanda Riverline Cruises for Dutch guests ).

In 1990, Schmitter decided to take charge of boat design. The result: “MS Liberté,” built in Belgium with a capacity of 150 passengers and more space per passenger than on previous ships.

Alsace Croisières began rapid expansion, building new ships and opening new itineraries on the Danube, Rhône and Saône rivers. The company was no longer only a regional operator. In 1997, Alsace Croisières was renamed CroisiEurope, marking its entry into the French capital, with the first Paris-Honfleur cruise, provided by “MS Douce France."

In 1999, Schmitter sold his company to his four children, who continue to run CroisiEurope today. Schmitter returned to his art, painting canvasses in the Vosges. Many of his paintings grace the public rooms on CrosiEurope's river boats. He passed away in 2012. Today, Gérard Schmitter is remembered as the founding father of the concept of river cruises on cabin boats.

The story does not end there, however. CroisiEurope now operates on all of Europe's major rivers, as well as in Russia, Asia and Africa. The company also operates ocean-going ships and coastal cruisers. New paddle-wheelers allowed CroisiEurope to navigate on the Loire and Elbe rivers.

In 2013, nearly five decades after Richard Parsons' *Palinurus* graced the waterways of Burgundy, CroisiEurope brought back to life what it called a "historical navigation mode on French canals." *Palinurus*, as you'll recall, was the first hotel barge to operate on the French canals.

CroisiEurope embarked on an ambitious mission to launch five modern hotel barges. Unlike the first converted cargo barge Palinurus, CroisiEurope's vessels were custom-built for leisurely adventures along the French Waterways in Alsace-Lorraine, Burgundy and the Loire Valley, Provence and the Camargue, Champagne and the Canal Saint-Martin in Paris.

This all takes us back to where our story began, on a canal where barges transported sandstone slabs to cargo barges being converted to transport passengers to a French entrepreneur who took passengers on multi-night journeys on boats where they could sleep comfortably in their own cabins. The river cruise industry was beginning to blossom, and in the next posts about the history of river cruising, we’ll learn about the early pioneers who today are building some of the most innovative river cruise boats afloat.

Join Me On A Barge Journey In France

Luxury hotel barges on the canals in France are a great way to travel. You can learn why by reading this post: 10 Reasons To Choose Barge Cruising. If you’d like to join me on a barge trip in France, see what’s available at Ralph Grizzle's Hosted River Cruise Trips